To illustrate, this is how my last session with Maupka went. My plan was to do this sequence: 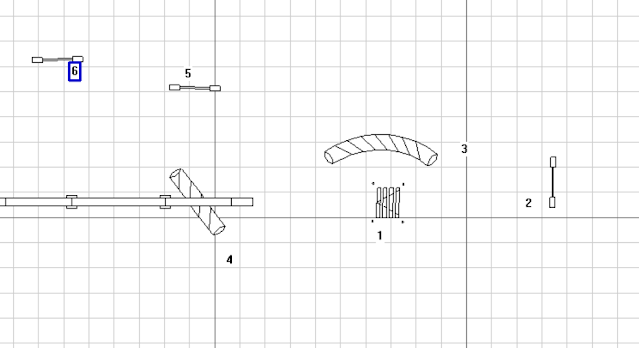 I wanted to start with just 1-3, so I put her in a sit close to the dogwalk exit, lead out, released... and she went past the long jump to go bark at the guy who was vacuuming a car behind a fence (some distance away from the jump no 2, she's seen him being there and doing that before, as we had to go next to him to enter the field). Ok, I called her back, put her in a sit, rewarded sit-stay, released, she did the long jump this time, so I rewarded. I put her in a sit again, released, she took the long jump and then run around the whole no 2, because she was still a bit distracted with the vacuum. I asked for the tight turn on no 2, rewarded, went back to put her in sit stay, released, we did 1-3, YAY!!! Success, celebration and fireworks. I let her win the toy, she ran a victory lap with that and then at some point dropped it to run and bark at a dog behind the other fence. I stopped her midway with "DON'T YOU EVEN THINK OF DOING THAT!", she recalled which is again HUGE, because for her it's still very difficult situation, so I praised her, ran to get the abandoned toy, played with her. She switched into "ok, we're serious now" mode so I attempted the whole 1-6 sequence which she did brilliantly, ta dam, again, success, celebration, loads of praise, end of session.

That was, all in all, pretty good session, in which we managed to work through distractions and in the end we also managed to run the longest sequence she ever did, with an "out" which is a skill she's learnt a week before. This is also what I consider to be a normal learning curve for a young dog. Some days we have better sessions, without her getting distracted anymore, with me coming up with a session plan that gets to be put in practice without any blips and getting just the right amount of difficulty to develop both her skills and confidence. Some days I'm worse - I forget she's still a baby and expect her to do things with more independence that she is currently able to or I fail to end the session in just the right moment, before her getting distracted becomes more likely (again, she's still a puppy, her attention span is not very long just yet). She is generally getting better and better - before summer just getting her to play in that field was very difficult. She is also totally freaking awesome - funny, smart, enthusiastic and totally normal for her breed and age.

But  this is what you'd normally see on social media from such a session:

What I'm saying is that normally you don't get to see "behind the scenes" on FB and if you're not experienced, savvy trainer or if you're lacking confidence and wonder whether you're doing it right or not, you might put unrealistic expectations of both yourself and your dog.

Not only you see all those fantastic performances of sometimes very young dogs, you also read all those books and blog posts from wise people and great trainers how you should build on success, should never get frustrated or allow your dog to get frustrated, split the behaviours into tiny steps without lumping things together etc. etc. This is technically true and this is something we should strive for, but on the other hand, just don't beat yourself up too much if it doesn't always go that way.

Good training session relies on so many components: your mood, your dog's mood, the right type of reward, right external situation (like lack of distractions that your dog is not ready to manage at that point), weather (especially not too hot for a young dog), your physical well being (and as you get older you'll find out that if you were to wait for you to feel perfectly, you'd never got to train at all), your dogs physical well-being, the moon, the stars and who knows what else. Only some of those factors are within our control. Also no matter how hard you try, sometimes you won't recognise right away that "today is not that day". Especially with a young dog: one day they would be super focused and able to do relatively advanced things, another time simple sit-stay seems way too difficult. That's fine. If you're not making any mistakes ever, probably you're just idling in your comfort zone -  when learning or teaching a new skill, sometimes you would miscalculate. Know that this is normal and learn from that. Record your sessions, think what you could have done better, why something worked or why something didn't work, change and adapt accordingly.

And enjoy the ride, being perfect all the time is both difficult and boring ;).

So, here's an example of another REAL training session - mistakes were made on both parts. We had fun. We'll do better in future.