Beware of the breeder...

Years ago my friend, who had a very cool boxer mix that she was doing agility with, was searching for a purebred boxer puppy that she also intended to compete in agility with - so she was looking for a line with lighter built, a bit longer muzzle and lots of health tests. When she was searching, she wrote an e-mail to one breeder, who was also happened to breed English bulldogs and that person somehow misunderstood what my friend was searching for and thought she wanted a bulldog for agility. Rather than answering "errr, I don't know if that's the best idea", she proceeded to tell my friend that her bulldog was super agile, keeping pace with her boxers running in the woods and of course her puppies would make perfect agility prospects.

Also years ago someone wrote me asking about Pyrsheps - potentially a very responsible owner, trying to get as much info as possible. That person had particular criteria he'd like his potential dog to meet, he was considering several breeds and contacting breeders and owners to see what would be the best match. I wrote him that in my humble opinion, the breed was not a good choice for him and explained why. He wrote me back saying that I was the very first person who wrote him "that breed is not for you", everybody else was just short of forcing their breed (whatever it happened to be) on him.

Someone writes in a FB group that they are looking for a dog suited for apartment living, medium energy as an adult, low prey drive and relatively "easy" companion for jogging, perhaps canicross and Pyrshep is one of the breeds on their list. Majority of people answer: Pyrshep is not your breed, they are wonderful but also loud, high energy, slow to mature and definitely not easy. Majority but - in each case - a breeder, usually a breeder who has been breeding for decades, owns a lot of dogs and says it's all in how you train them and of course they are easy and not barking at all.

It could be, of course, that the breeder has more experience, is a better trainer, and knows something the average owners don't.

Could also be that they simply want to sell their puppies.

Before I got Vigo, I was also searching for a breed for myself and one of the breeds I considered at the time was Manchester terrier - I found a breeder relatively close, called her and scheduled an appointment to meet (MT were and still are, quite rare). The breeder answered my questions, showed me her dogs, we talked... but literally at no point she said "I think they are the breed for you, get one". You can guess that I never got a Manchester terrier and most probably never will, but I actually keep quite fond memories of that meeting - she was a breeder who was perfectly willing to educate about her dogs and her breeding, someone who had nothing to hide - but also didn't feel the need to sell her puppies to just about anyone showing up on her doorstep. She probably realised as much as I did that there was no chemistry and it wouldn't be the best choice. 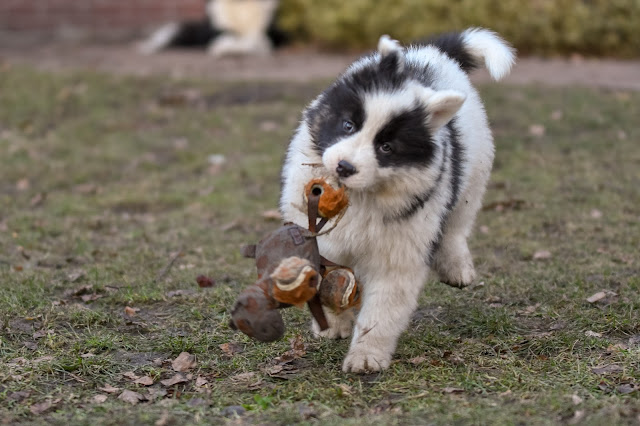 Laika puppy for cuteness and because post with photos are better :D
Beware of the breeder who doesn't cross-examine you but says "I've got exactly what you need & want". I'm saying that both as a puppy buyer and as a very occasional breeder - the puppy buyer should be the one trying to convince the breeder to sell them a puppy, not the other way round. Be very wary of a breeder who claims the puppy will be a certain size, will be successful in dog shows or dog sports - other that saying the puppy might have that potential.
What I'm saying is - good breeder knows their value and the value of their dogs. They don't need to convince anyone to buy puppies from them and they would never claim their dogs are something else that they actually are, because that wouldn't be in the best interest of these dogs in the first place.
Autor: Olga