A very subjective overview of breeds suitable for agility 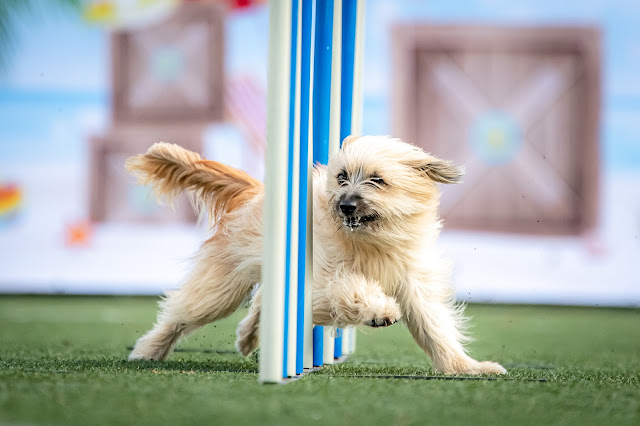 So initially this post was supposed to be only in Polish, but someone suggested it might be useful in English as well, so here we go. It was inspired by people asking on general FB dog-related groups about recommendations for a breed that would be suitable to train agility with and mostly absurd, or funny, or ignorant (or all of the above) answers they usually received. The problem is that people who don't do agility recommend all kind of breeds which they think would be suitable, without having slightest idea what actually is required and expected of the dog in this sport. They also don't really grasp the difference between backyard training and competition, which requires working under greater pressure and among distractions. Sometimes it also happens that breeders recommend their own breed simply because they happen to have puppies for sale and recommend them even though they don't really meet original poster expectations.
Hence I came with the idea of making a list (which is far from complete although I intend to develop it further) based on descriptions of people who actually work and compete in agility with those breeds as well as my experiences as a trainer and competitor.

Disclaimer #1: Dogs are not cookie cutter made - so even within one breed there might be huge differences, especially that the breeding of many breeds is diverging from the original working purpose - sometimes heading towards "sport lines", more often heading towards somehow more "user-friendly", less driven family dog, quite often possesing also quite extreme physical characteristics in comparison to breeds' ancestors. Therefore saying "they are awesome for agility" or "they are not suitable for agility at all" are generalisations and particular individual might not really match that description.
Disclaimer #2: quite often (though not always) breeds and individuals with great predispositions for agility are not really best family dogs or at least not really easy to live with. Sometimes because of traits such as high reactivity, great intelligence, lots of energy they could be quite demanding especially during first months or years of their lives. Therefore I think it's really important that predispositions for sport are not really main criterion when picking a breed - especially that you might cease to be interested in sport for particular reason (dog's injury, world pandemic, change of life circumstances) and you'd still need to live with particular animal. So ask yourself if the breed characteristics are something that you would generally enjoy and feel good with and whether you are up to providing that particular breed with the kind of life it requires.
Disclaimer #2a: Lots of people who plan to train agility don't realise yet what it is like. It's costly. It requires regular training, sometimes at unearthly hours or horrific weather. The success doesn't come fast. Well, generally it requires sweat, blood and tears and so on - and sometimes you might realise it's not really what it cracked up to be.
Disclaimer #2b: No dog, however predisposed, would train and handle itself. Dog's handler is an integral part of the team and without devoted and talented handler the success is not possible. Work both ways actually, even the best handler won't become world champion in agility with a dog that is physically or mentally really not up to the task.
Disclaimer #3: There is an authentic story about a farmer, who took part in ultramarathon from Sidney to Melbourne, wearing overalls and boots, yet without his dentures, because they made noise when he was running. Cliff Young was 61 years old when he decided to participate and needless to say, nobody thought he'd stand a chance. He ended up not only winning it, but also improving the record by almost two days and actually changing the whole approach to running ultramarathons. The moral of the story is that sometimes you just need to ignore what everybody else is saying and do your thing. I was told cockers are not good for agility and then ended up competiting 6 times at world championship with a cocker, winning Polish Agility Cup with her as well as Polish Agility Champioship (funnily enough, I never won it again with any of my other dogs). You can't really overestimate luck, will and sheer heart for something - and sometimes success is given to those who don't know something is not possible.
Disclaimer #4: if your breed is not on the list and you're actually competing with it in agility - drop me a message and share your experiences - I'd be happy to update the list. That being said, I'm not really interested in "I've never done any agility, but I have or breed this particular breed and I think it would excel in it" kind of messages.
Disclaimer 5: if your breed is on the list, but you think what is written about it is utter bollocks, also drop me a message - particularly if you actually compete in agility with that breed.
The list doesn't include mixbreeds, simply because they are too big and too varied group. If your mixbreed origins are knows, you might usually expect some combination of the traits of the breeds that went into the mix.
LINK TO THE LIST
Autor: Olga